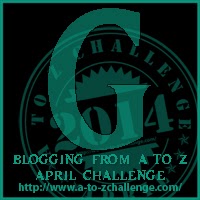 If you ask me if I write science fiction or fantasy, I can only answer, Yes.  Otherwise, where do you place the sharp line between the two, choosing one instead of the other… and why would you want to?

G is for genre.

Of course, that means there will never be an agreed-upon definition, especially since many readers now say they are sick and tired of fantasy fiction with magic or low-tech settings or alternate universes or supernatural creatures. Likewise, many readers complain of science fiction with space travel, or high-tech settings, or alien life forms, or plots that arise out of scientific concepts.

Sometimes I wonder what they expect, if they want every known trope of the genre done away with, banished forever.

From one of my blog posts many moons ago:

“It’s ALL clichés!  [says the ignorant reader who doesn’t know the genre at all] “Syfy is either set in the future or in space or in some alternate reality, and it’s all been done before.  Clichés!  Bad Writing!  When will these syfy people learn to think and write something set in the real world right now with no freaky technology or aliens or stuff?”

The answer is simple:  That wouldn’t be science fiction.  (You’ll notice that no one asks, “Why can’t those romance writers do something original like write a story where no one falls in love?”)  While science fiction is notoriously difficult to define, […] there are certain elements that contribute to a work of fiction fitting the genre, and a complete lack of any of those elements isn’t new and original sci-fi; it’s something outside the genre.

On the other hand, I don’t want some kind of pigeonhole definition, either; I don’t want anyone laying down an absolute and saying that no work of fiction may be called fantasy unless it contains a setting clearly based on medieval Europe, complete with identical tech level, political system, and ethnic groups, but with magic tacked on to make it fantasy. (I was at one time so damn sick of bad rehashes of the King Arthur legend that I almost didn’t read what turned out to be a really good series, simply because it contained a character named Merlin.) Nor do I want someone saying that science fiction must be about the rockets, robots and ray guns rather than about the people who create and use such things, or that it must happen on a far planet with lots and lots of aliens.

I’m gonna be honest with you: I do believe that a few things are distinctly science fiction or fantasy, but for the most part, I’m the sort of person who doesn’t give a rat’s ass about the Great Science Fiction Versus Fantasy Debate. For the most part, whether a fictional thing is one or the other depends on what kind of story it is in, and how the author presents it: reading someone’s mind with a magical whatsit versus telepathy, for example. (In my opinion, this gets presented as too overpowered and superhero-ish in a lot of fiction, but what do I know about it? It’s not as if I have this ability myself. *shakes head*) Even when the ‘scientific explanation’ is mostly just hand-waving, if the feel of the story is sci-fi…

I’m also in favor of blurring the line between science fiction and fantasy. As SF/F author Roger Zelazny once wrote, “The part of me that wishes to remain honest while telling the calculated lies of fiction feels obligated to indicate in this manner that I do not know everything and that my ignorance, too, must be manifested in the universes which I create.” (This may not be an EXACT quote. I don’t have the essay in front of me, and it’s actually been a few years since I read it.)

Another thing about genre, something that applies to more than just SF/F… I know there’s a tendency these days to try to include every single element of a story as another genre: Got a minor love story subplot to your techno-thriller? Your novel is both a techno-thriller and a romance! Are some of the major characters in your science fiction novel under the age of 18? Your novel is both sci-fi and YA! (*shakes head* Back in my day, YA indicated audience, not genre.) A romance novel that has demons and angels and werewolves and vampires (but no rutabagas, thank the gods!) and faeries and ninjas and space aliens is a sci-fi paranormal romance-sans-rutabagas thriller!

I honestly don’t know why anyone does that.  Explanations would be welcome…

For several years, I’ve been putting my uncanny knack for grammar and punctuation, along with an eclectic mental collection of facts, to good use as a Wielder of the Red Pen of Doom (editor). I'm physically disabled, and I currently live with my smugly good-looking twin Paul, who writes military science fiction and refuses to talk about his military service because he can’t. Sometimes Paul and I collaborate on stories, and sometimes I just edit whatever he writes. It's worked out rather well so far. My list of non-writing-related jobs from the past includes librarian, art model, high school teacher, science lab gofer… Although I have no spouse or offspring to tell you about, I do have eight cats. I currently spend my time blogging, reading, editing, and fending off cats who like my desk better than my twin’s.
View all posts by Thomas Weaver →
This entry was posted in Uncategorized and tagged A-Z Challenge, cliche vs. trope, reading, writing. Bookmark the permalink.