I’ve been asked to share some photos of armor made by my twin or myself.  (I blanked out faces of the wearers, but that shouldn’t matter — the point of the picture is the armor, not who’s in it, right?)

Looks a bit raggedy, which is sort of the point here, since this armor was made for a mercenary persona.  Phelan the Fae, Roman phouka (there are holes in his helmet for his horns to pass through, and oh, was it amusing to see the looks on people’s faces when he’d take his helmet off and the horns were still on his head!) in a combination of leather and steel armor.  Black-painted metal scales on the body armor; heavy, fully articulated leather arms and legs… The helmet is based on traditional spangenhelm designs.  They’re difficult to see, but he’s holding leather gauntlets with separate, articulated fingers.

I’m only allowed to use this photo because I blanked out the face.  Not the best picture (my fault), but it’s the only full-length one I have of the armor we made for Grace several years ago.  This isn’t meant to be actual LARP armor — the pointy bits on the joints aren’t legal for most systems, and who’d want to fight in the ones that do allow that on the field? — but rather for wearing to renfaires and such.  “Costume” armor, but functional nonetheless.  Mid-weight, water-hardened leather specially dyed and waxed to match the cranberry-red suede.  Fully articulated arms and legs; the greaves are separate from the knees/upper legs for improved movement, and the arms have buckled straps above the elbows that go under the suede sleeves.  (The original idea was to have brass rings laced in an all-over pattern onto the suede parts, like we did with that frighteningly heavy rust-colored set, but we decided that would be too much bright metal for the look she wanted.) 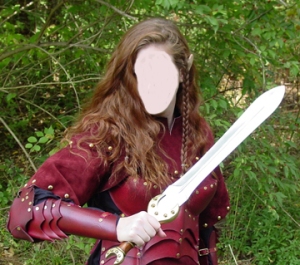 Close-up of the red armor, showing articulation of the elbow.  The sleeves are riveted to the body, but the suede mantle is a separate piece; a smooth leather gorget worn layered over the mantle would give a more finished look, but she’s not wearing it here.

I’ve jokingly referred to this armor as the “scary scale,” partly because it makes the wearer look even bigger.  (For size reference, the sword in this picture is slightly more than 5 feet long.)  Leather scale armor.  The half-sleeved coat with integral shoulder mantle is made of suede with scales of smooth leather riveted to it.  Heavy leather greaves and fully articulated half-arms.  Mitten-style gauntlets worn over suede gloves (which my clone made himself).  The strap across the chest is for carrying the sword scabbard, which is made of wood covered in thin leather, and there’s a wide leather belt around the waist, too (and although it hardly shows in this photo, an “infinity braid” long belt worn over that).  I’m pretty sure the boots he’s wearing are ones he made, but I could be wrong.  🙂

I’ve never made chainmail, but my twin has.  (Technically, the correct term is just mail, but whatever…)  Chainmail is… extremely tedious, more than anything.  It takes a lot of skill to make really high-quality stuff, but just about anyone can make adequate chainmail if they have enough patience.  I may or may not have enough patience.  Doesn’t matter, though, because I refuse to wear steel armor.  When it comes to metal armor of whatever kind, what I really want to make sometime is bronze scale.  There’s a site called The Ring Lord that sells pre-made bits for making that, but alas, the bronze scales are prohibitively heavy, especially considering how many I’d need for a proper hauberk.  *sigh*  (There’s also a pair of scaled gauntlets I want to copy.  I just wish I could trust the original description of “scaled,” because… Well, sometimes even good writers get terminology wrong.  Damnit.)

(Oh, for fuck’s sake, WordPress — now you think suede isn’t a word, either?  And dyed?  No, I don’t mean died.  Who wrote your spellcheck program, anyway?  You recognize hauberk, and I’m proud of you for that, but please, really, get a clue.  Take two — they’re small.)

For several years, I’ve been putting my uncanny knack for grammar and punctuation, along with an eclectic mental collection of facts, to good use as a Wielder of the Red Pen of Doom (editor). I'm physically disabled, and I currently live with my smugly good-looking twin Paul, who writes military science fiction and refuses to talk about his military service because he can’t. Sometimes Paul and I collaborate on stories, and sometimes I just edit whatever he writes. It's worked out rather well so far. My list of non-writing-related jobs from the past includes librarian, art model, high school teacher, science lab gofer… Although I have no spouse or offspring to tell you about, I do have eight cats. I currently spend my time blogging, reading, editing, and fending off cats who like my desk better than my twin’s.
View all posts by Thomas Weaver →
This entry was posted in Uncategorized. Bookmark the permalink.

3 Responses to Fantasy-medieval armor — with photos!