(Needless to say, this particular post is not even remotely safe for work.)

Have you ever seen an Amazon review on, say, a military thriller in which the reviewer complains about the novel containing “the f-bomb,” as if it were inappropriate or unexpected for a novel in that genre to contain any strong language?

My own thought is that, unless the novel is religious fiction or was written for the under-14 crowd, readers should expect the “f-bomb.” At least some occasional, mild cussing in whatever form. D’uh. Some humans cuss; fiction, like life, will almost certainly contain examples of that. 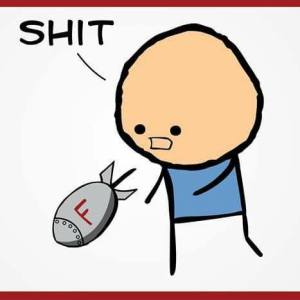 Not too long ago, out of curiosity (and because I’d seen yet another review of someone’s novel complaining about “the f-bomb” — although I suspect fuck wasn’t the only word the reviewer didn’t approve of), I decided to count exactly how many of the more common cuss words were contained in each of my clone’s novels. And I’m sure you’re all eager to learn the results…

Cussing in The Remnant

(Note: Especially in this book, uses of damn and hell are not necessarily cussing. Example: “Your species stands on the brink of damnation.”)

In The Madness Engine

Fuck occurs more often in this third novel because Tonya Harris, one of the major supporting characters, has a rather foul mouth sometimes.

To me, these counts seem quite tame, considering the shortest book in the series so far is well over 100K words. Characters using strong language is one of those things, however, that readers either don’t mind or will totally lose their cool over — and the ones who’ll lose their cool don’t have the sense sometimes to just avoid books which may contain strong language. *shakes head at foolishness of humans*

For several years, I’ve been putting my uncanny knack for grammar and punctuation, along with an eclectic mental collection of facts, to good use as a Wielder of the Red Pen of Doom (editor). I'm physically disabled, and I currently live with my smugly good-looking twin Paul, who writes military science fiction and refuses to talk about his military service because he can’t. Sometimes Paul and I collaborate on stories, and sometimes I just edit whatever he writes. It's worked out rather well so far. My list of non-writing-related jobs from the past includes librarian, art model, high school teacher, science lab gofer… Although I have no spouse or offspring to tell you about, I do have eight cats. I currently spend my time blogging, reading, editing, and fending off cats who like my desk better than my twin’s.
View all posts by Thomas Weaver →
This entry was posted in Uncategorized and tagged novel, The Fallen, The Madness Engine, The Remnant, writing, WTF?. Bookmark the permalink.

18 Responses to Expect the f-bomb.