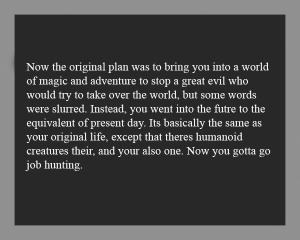 Add a comma after Now (used here as an interrupter rather than a literal indication of relative time).

Consider combining the part beginning with Instead with the previous sentence. (It isn’t necessary, but this change would improve overall flow of the paragraph.)

Futre is incorrect; change it to future.

…and that’s where I stop for a moment, because I have no idea what the writer meant by into the future to the equivalent of present day (and neither do you, so don’t go acting all superior), and I have no way of asking for clarification, the way I’d ask if I were doing this copyediting “for real.” Fun fact, though: It can’t be the future and present day at the same time. Pick one, or figure out what you really mean by equivalent of present day and write that instead.

Add an apostrophe to Its to make the contraction of It is.

Theres is incorrect, but we don’t want there’s, either, because there is doesn’t work with creatures. (There is creatures? I don’t think so!) Replace there’s with there are.

Replace their with there (or, if you realize having two uses of there with slightly different meanings in the same sentence is kinda, y’know, awkward, replace the latter there with in this world or something similar).

Replace your with you’re.

Best I can do to make this example readable without erasing the writer’s own voice/style (such as it is), because that’s not what a copyeditor should do:

Now, the original plan was to bring you into a world of magic and adventure, to stop a great evil who would try to take over that world, but some words of the spell were slurred, so instead, you went into a future that’s strangely like the present day. It’s basically the same as your original life, except that there are humanoid creatures in this world, and you’re also one. Now you gotta go job hunting.

For several years, I’ve been putting my uncanny knack for grammar and punctuation, along with an eclectic mental collection of facts, to good use as a Wielder of the Red Pen of Doom (editor). I'm physically disabled, and I currently live with my smugly good-looking twin Paul, who writes military science fiction and refuses to talk about his military service because he can’t. Sometimes Paul and I collaborate on stories, and sometimes I just edit whatever he writes. It's worked out rather well so far. My list of non-writing-related jobs from the past includes librarian, art model, high school teacher, science lab gofer… Although I have no spouse or offspring to tell you about, I do have eight cats. I currently spend my time blogging, reading, editing, and fending off cats who like my desk better than my twin’s.
View all posts by Thomas Weaver →
This entry was posted in Uncategorized and tagged glitch. Bookmark the permalink.