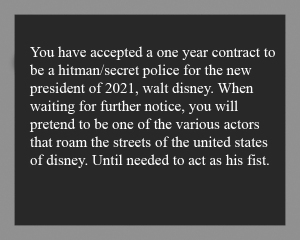 My brain hurts now… Nevertheless, I’ll make an effort to force some sense into this example.

Because it is used as a compound adjective (modifying contract), one-year should be hyphenated.

Walt Disney should be capitalized (even if — as seems far more likely — this is just a robot built and programmed to imitate Mr. Disney as part of some evil scheme).

Change the beginning of the second sentence from When to While. (The difference is subtle, but while works better for something recurring/ongoing.)

You have accepted a one-year contract to be a hitman/secret police officer for 2021’s newly elected president, Walt Disney. While waiting for further instructions, you will pretend to be one of the various actors who roam the United States of Disney, until needed to act as his fist.

The example implies that this is happening only in what was (before the bizarro election that got a Disney-bot elected as president) either Disneyland or Disney World… and neither is large or complex enough to be described as “united states” of anything. Perhaps the new name refers to both, plus that Disney park in France that Eddie Izzard joked about years ago: ‘You can build it, but we won’t go.’ Or perhaps — as seems somewhat more likely — the writer who created the example doesn’t have a frakkin’ clue about the connotations of the word states.

For several years, I’ve been putting my uncanny knack for grammar and punctuation, along with an eclectic mental collection of facts, to good use as a Wielder of the Red Pen of Doom (editor). I'm physically disabled, and I currently live with my smugly good-looking twin Paul, who writes military science fiction and refuses to talk about his military service because he can’t. Sometimes Paul and I collaborate on stories, and sometimes I just edit whatever he writes. It's worked out rather well so far. My list of non-writing-related jobs from the past includes librarian, art model, high school teacher, science lab gofer… Although I have no spouse or offspring to tell you about, I do have six cats. (The preferred term is "Insane Cat Gentleman.") I currently spend my time blogging, reading, editing, and fending off cats who like my desk better than my twin’s.
View all posts by Thomas Weaver →
This entry was posted in Writing Glitches and tagged glitch, WTF?. Bookmark the permalink.