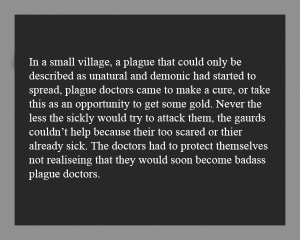 There’s only so much I can do with this one…, but I’m willing to give it a try. (Perhaps the ‘my brain hurts now’ reaction to dealing with such bad writing will be an adequate distraction from the actual pain I’m feeling in most of my body.)

First, the necessary changes, based on actual rules of grammar, punctuation, etc.:

Change the comma after spread to a period and begin a new sentence.

Delete the comma after cure.

Nevertheless is one word, not three. (It’s also an adverb — eek! *laughs at averb-phobes*)

Change the comma after attack them to a period and begin a new sentence.

Change their too to they’re too, and change thier already to they’re already.

Add a comma after themselves.

Realising (or realizing) is misspelled.

So that’s all of the corrections made according to rules of writing. I’ll also change bits of it to help the sentences flow better, make a bit more sense, etc. In particular, there’s not realising that they would soon become badass plague doctors. What does that even mean here? *sigh* Because I cannot ask the writer (and am unsure the writer could tell me anyway), I’ll make my best guess and rewrite the end of the sentence accordingly.

In a small village, a plague that could only be described as unnatural and demonic had started to spread. Plague doctors came to create a cure or to take this opportunity to earn some gold. Nevertheless, the sick tried to attack them. The guards couldn’t help the doctors because becaues they were too scared or already sick themselves. the doctors had to find a way to protect themselves, not realising they’d become quite formidable as a result.

As my twin pointed out, the writer of this example has no frakkin’ clue what actual plague doctors did, ’cause it wasn’t treating the sick.

For several years, I’ve been putting my uncanny knack for grammar and punctuation, along with an eclectic mental collection of facts, to good use as a Wielder of the Red Pen of Doom (editor). I'm physically disabled, and I currently live with my smugly good-looking twin Paul, who writes military science fiction and refuses to talk about his military service because he can’t. Sometimes Paul and I collaborate on stories, and sometimes I just edit whatever he writes. It's worked out rather well so far. My list of non-writing-related jobs from the past includes librarian, art model, high school teacher, science lab gofer… Although I have no spouse or offspring to tell you about, I do have six cats. (The preferred term is "Insane Cat Gentleman.") I currently spend my time blogging, reading, editing, and fending off cats who like my desk better than my twin’s.
View all posts by Thomas Weaver →
This entry was posted in Writing Glitches. Bookmark the permalink.