…And then this happened.

Posted on September 8, 2022 by Thomas Weaver 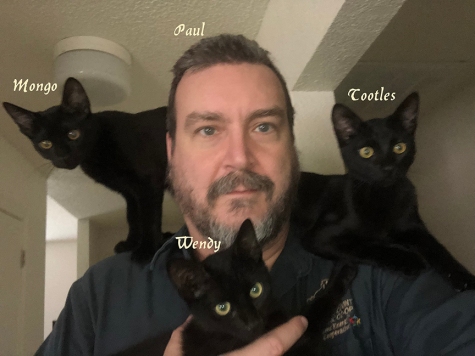 Paul referred to this as a “triple event”: all three of the older kittens jumped onto him at more-or-less the same time.

The kittens love to sit on Paul’s shoulders. It doesn’t matter if he’s standing (as he is in this photo); they’ll jump or climb to get to where they want to be. Tootles, in particular, would spend all day as a shoulder cat if he was allowed to.

The kittens are about five months old in this photo, and they’re already almost as big as Harmony, our “tiny cat” (who isn’t all that tiny — she’s just smaller than the other adult cats). The’ll get a lot bigger, although not too big, since there’s a tendency for dark-furred “thistle cats” to be somewhat smaller than the white ones. (Martin and Lily are white-furred thistle cats. They’re about a month younger than the Trio, but Martin is probably gonna be huge when he’s an adult, just like his father Mr. Fluffy and his uncle Logan.)

How the Writing Is Going (September 2, 2022), Plus Some Real-Life Stuff

Posted on September 2, 2022 by Thomas Weaver

Word count on the Stormriders manuscript is now a bit above 55K.

The story has taken a direction that neither the author nor his twin (*waves*) expected: “along the z-axis,” as we’d have said back in the middle of the last decade of the previous century. Paul says it’s Joseph’s fault the story took this turn. (Of course he says that.)

No writing will be done today, because Paul is traveling to Texas to hit people with sticks. Translation: He’s going to a Society for Creative Anachronism event and will fight in at least one tournament. (They’re having an ax tournament — how could he say no to that?) Much work was done over the past week to prepare for this event, and I may end up blogging about that sometime soon-ish.

As of yesterday afternoon at five, the word count for Stormriders had reached 48K.

Anyway. The writing goes well on Stormriders. The most recently written bit involves a scene that’s in the immediate aftermath (sans epilogue) of The Dark Plaza. I don’t think it contains any “spoilers” for that novel, though. (Besides, who’s gonna read both The Awakening series and The Endless Realms? I mean, just because there are three characters in Project Brimstone who also appear in various books of The Awakening, that doesn’t automatically mean these series are connected or anything, right? *rolls eyes*)

The “prequel series” is slightly stalled at the moment, not because the author doesn’t know what happens next but because he does know. I understand; I’m not exactly looking forward to when the story gets to the stuff in Utah, but then again, I think I’ll feel relieved to have that out of the way. (‘That’s kinda twisted, Weaver: You’re not worried about WWIII happening in that setting, but you’re worried about one character being interrogated by government agents for a few weeks?’ Yeah, because I’m not there for the WWIII part, am I?)

The Stormriders manuscript is currently just above 39K words.

The author does not write standalone stories: As I’ve said before (lots and lots of times, and maybe eventually all the people who enjoy “the Tebrey stories” so much will read the other books), there’s a bit of overlap between The Awakening and The Endless Realms series, and although it’s not necessary to read everything else to get what’s happening in one series, readers will find the story much richer for having that additional information.

(“Spoilers”: Geoffrey and Deegan are both in Project Brimstone, although they’re not major characters. Erin, who has thus far been seen only briefly by readers — she’s in the “prequel series,” too, but those haven’t been published yet — makes an appearance in Stormriders. We even have recurring villains: the Urkenze continue to be a threat, and now they’re getting ready to steal the Golden Kingdom’s moon-that-isn’t-a-moon. The main plot thread of Stormriders is about Harrison and company trying to track down the cause of the increased reality storm activity and stop it if they can. They’ve reached the realm that seems to be the center of the storms, and they’re about to find out that an ancient device there is creating the storms. A local thinks the device was created by a “sorcerer king” from centuries ago… This same local very much wants to find this sorcerer king and kill him if possible. After making him turn off the storm machine, of course. Fun times. 🙂 )

Anyway. We still intend to publish both The Dark Plaza and Instruments of Faith (which is peripherally connected to Project Brimstone, etc., because Harrison and Delling were friends ever since they served in the army together) this year. What comes immediately afterward… Who knows? Paul says the prequel series needs to be published before “that novel” (which is actually going to be a series, although we’ve never settled on whether Wooden Ships is a novella or a full-length novel), and I agree — people tend to care a lot more about the “after” of something if they know that the “before” looked like, and this isn’t the sort of thing that can be handled with a few brief flashbacks. (“Brief, he says,” mutters a figment of my imagination.) So, everything from ‘interdimensional ninjas on the front lawn’ to Utah and the feral plague and… Well, you’ll see.

I’ve heard/read that some fiction writers worry about running out of ideas and eventually not having any more stories to write, but maybe that’s a problem that only applies to humans. 🙂

(I want to say something about discussing art while we wait, but… *shrug*)

This picture is the not-quite-finished cover for the last book of The Awakening series. I think all that remains to be done with it is the sort of thing that has to wait until there’s a final word count for calculating the size of the paperback edition. Which means this probably is the finished cover for the e-book.

(At the moment, I’m in the process of doing a final round of editing on Instruments of Faith, the sequel to I Won’t Cry for Yesterday. As soon as that’s finished, though — we have a cover for Instruments already, BTW — I’ll get to work on The Dark Plaza. Unless something goes wrong, both novels should be published this year. And while I’m working on editing Plaza, the author will be finishing Stormriders, or whatever he ends up calling the sequel to Project Brimstone. Worked on that manuscript a bit today, actually — the weather seems particularly suited to it.)

Sometime this spring/early summer, Paul decided that he needed to make a few adjustments to the manuscript for The Dark Plaza in light of things the characters told him during the writing of the prequel series, so he’s been making those adjustments in bit and pieces as he has time/mental energy to do so.

He also decided yesterday (I think) that he needed to expand on the last part of the manuscript (a part that could be referred to as the “boss fight” sequence, if one wanted to be flippant and also oversimplify matters), because previously he’s focused on the central thread and nothing else.

So today he wrote three thousand words of new material in the last handful of chapters of The Dark Plaza.

The Trio — Wendy, Tootles, and Mongo — are a bit more than three months old now. They’re such sweethearts… and also such psycho little beasts. Kittens, y’know? 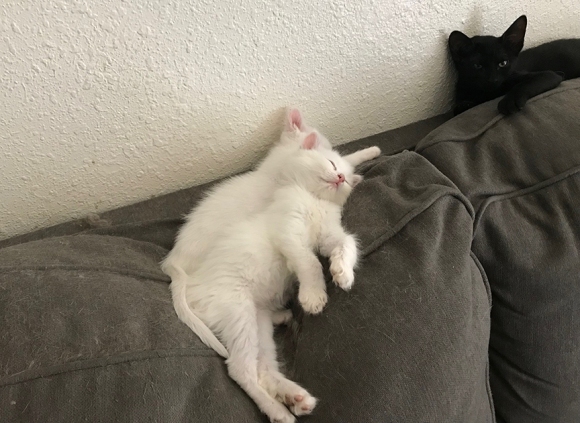 The “dust bunnies” are younger than the Trio by about a month. Martin is the fluffy/semi-longhaired one. His sister Lily (behind Martin in this photo) has a faint grey smudge on the top of her head.

I decided to use the original version for this one, because it has a dragon in it. 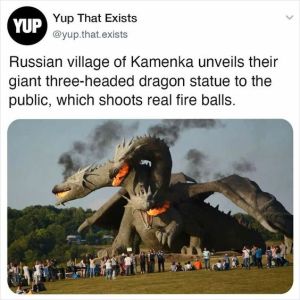 As written, that sentence says the public shoots fireballs.

I’m fairly sure they don’t, though. (Look at those people. Do any of them appear to be shooting fireballs?)

Russian village of Kamenka unveils to the public their three-headed dragon statue, which shoots real fireballs.

Russian village of Kamenka unveils their three-headed dragon statue, which shoots real fireballs, to the public.

‘The word is ANACHRONISM…’

A funny thing happened when my sister-in-law had jury duty.

I’ve mentioned before that Grace is a member of the Society for Creative Anachronism. (Some of you reading this may already see the “punchline”…) Well, as it so happens, even people who have attended law school sometimes cannot read as well as they ought to: One of the attorneys involved in the case for which a jury was being selected felt that there was a big problem with allowing someone who’s a member of an “anarchism” group to serve on any jury at any time.

At least Grace was given the opportunity to explain: “We’re not anarchaists. The name of the organization is the Society for Creative Anachronism,” she said, carefully enunciating the word. “We’re a non-profit educational organization with a focus on the history and culture of the Renaissance.” (Yes, technically, the SCA is also focused on the history and culture of the Middle Ages, but it’s best not to mention that around people who may believe that medieval means evil.) The judge seemed amused by the error, Grace said, and even thanked her for “educating Mr. [Attorney].”

We’ve heard stories from “old-time SCAdians” (people who were in the SCA prior to 1990) about people mistaking anachronism for anarchism. (Seriously, if the mundanes — in this context, meaning anyone who’s not a SCAdian, so technically I’m a mundane, too — were going to make false assumptions about the political views of any member of the Society for Creative Anachronism, it would make more sense for them to assume SCAdians are monarchists. ‘Cause, y’know, all the make-believe about kings/queens and such. But they’re not monarchists, either.) Nevertheless, it was still a surprise for Grace to encounter such a mistake just this morning. At least it was funny, once the misunderstanding was cleared up, and at least Grace didn’t get into any trouble for being a SCAdian. (In this, once again, small-town New Mexico shows itself to be far better than small-town Kentucky.)

Now, let’s just hope that no one from “kingdom” (the local large-scale chapter) finds out about this, or Grace will be in trouble with them… again. (Long story, and one I hope I never need to tell.)

I got a coffee mug for my birthday.

It looks exactly like one that’s mentioned briefly but never described in a novel that has yet to be published.

The mug in the book was given to Jason by Brygida, who has a warped sense of humor.

My mug was given to me by my sister-in-law, who also has a warped sense of humor.